The compound annual growth rate of the global submarine power cable market from 2022 to 2026 is 4.5%

According to a report released by an international market research agency, the demand for the submarine power cable market is expected to increase at a compound annual growth rate of 4.5% by 2026.

We can see from the research data that the growth of offshore renewable energy installations is one of the main factors contributing to the steady growth of submarine power cables in the expected period. Among them, due to the application of high-power offshore wind turbines, the installed capacity of offshore wind power will increase rapidly, driving the demand for submarine power cables, because offshore wind turbines need to continuously transmit power to power consumption areas.

The growth of the submarine cable market is closely related to the expansion of offshore renewable energy installations and capacity. From the perspective of development trends, the increasing demand for submarine HVDC cables will become one of the main trends in the development of submarine power cables during the forecast period. Underground HVDC cables are considered a viable alternative for transmitting electricity under the sea over long distances. Such projects aim to end the energy isolation dominated by the European region and remove additional constraints that impede the growth of the internal energy market.

Renewable energy is on the rise thanks to the Kyoto Protocol, which is linked to the United Nations Framework Convention on Climate Change and sets binding targets for reducing greenhouse gas emissions for 37 industrialized countries and the European Community. The growing need to connect renewable energy projects to the grid is affecting many renewable energy projects, including offshore wind farms and solar farms in different parts of Europe.

The laying and maintenance of offshore power cables is one of the main factors currently restricting the growth of the submarine power cable market. The first step in cable laying is the selection of the installation path. The laying of any submarine cable needs to last 25 years, which makes routing a major challenge, which must have minimal risk and not cause any damage to the cable. At the same time, however, the path should also be located in an area that facilitates maintenance activities.

The second step in the laying of submarine cables is to obtain permission from relevant agencies, which is also very challenging, because submarine cables transported over long distances often pass through waters in different countries. After obtaining permission, the route will be surveyed and designed. , manufacture and load cables onto submarine cable laying vessels. Errors in any one of these steps can lead to the failure of the entire project.

Cable laying is the most critical step in the whole process, which involves more challenges, such as laying the cable to the correct location, keeping it under the seabed to avoid damage, and ensuring project reliability. After the laying is completed, the submarine cable must be debugged and then delivered to the owner. There are many challenges involved in every step of the whole process, so submarine cable laying and maintenance is a major challenge facing the global submarine power cable market.
From a regional market perspective, 47% of the market growth during the forecast period will come from Europe, especially Germany and the United Kingdom. On the other hand, government support and increasing focus on wind energy will boost the growth of the European submarine cables market over the forecast period. At the same time, demand in North America and Asia Pacific will also grow significantly over the forecast period. 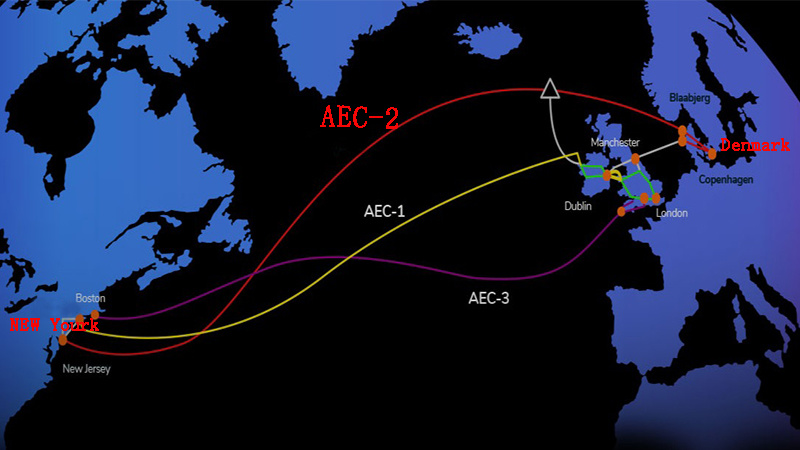 AquaComms CEO Nigel Bayliff revealed that AEC-2 is another important fiber optic system connecting the Americas and Europe, and the first new submarine cable system to directly connect North America and Northern Europe in 20 years; it is a fully diverse and resilient transatlantic Submarine line, doubling the fiber-optic connection between the two locations.
AEC-2 will provide a modern, high-reliability, carrier-neutral interconnection point between Wall, N.J., and Long Island, N.Y., with resilient network connectivity between the two. In Europe, these services will be provided by all landing stations and operator-neutral Metro Area Points of Presence (PoP) in Dublin, London, Amsterdam and Brabjerg, increasing the variety and reliability of internet connections.
The existing AEC-1 fiber optic cable went into service in 2016, and AEC-2 complements the existing infrastructure, connecting the United States with Denmark and doubling the fiber optic connection between the two countries.
Not only that, but the AEC-3 cable connecting Boston (US) to Slough (UK) will also be implemented "soon", the company's third transatlantic submarine cable, expected to launch in 2023.