Measures to prevent wire and cable fire in advance

Wires and cables are very common in our daily life. What if there is an accidental fire during use? We can learn some fire prevention measures in advance.

As a product that exists all the time in our daily life, wire and cable are closely related to our lives. We should not neglect the prevention of wire and cable.In order to prevent the occurrence of cable fire safety accidents, the following preventive measures can be taken. 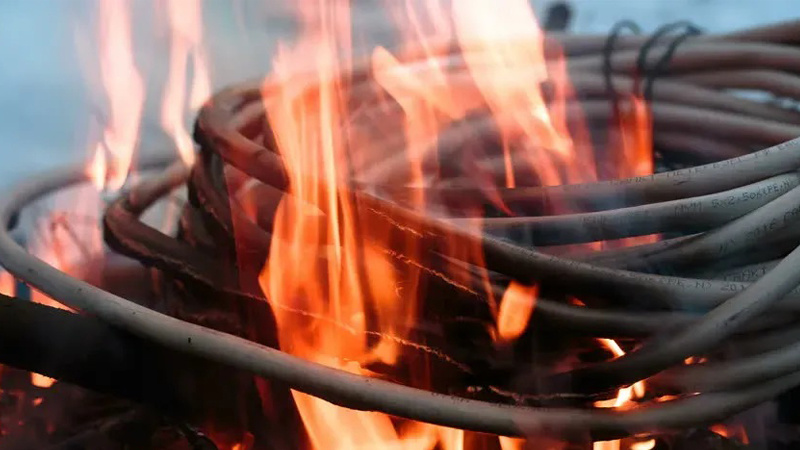 1. Select cables that meet thermal stability criteria.
Select the cable. Under normal circumstances, it can reach the heating standard of long-term rated load. Under the premise of short circuit, it can achieve short-term thermal stability and avoid the cable temperature being too high and catching fire.
2. Avoid load on cables during operation
When the cable is working under load, it should not exceed the rated load. If it is overloaded, the overload running time of the cable should be strictly controlled to avoid overloading the cable and causing the cable to catch fire.
3. The relevant regulations for cable laying should be followed
When laying the cables, try to keep them away from the heat source, and avoid parallel or cross arrangement with the steam pipes. If they are parallel or cross, keep the required distance and adopt heat insulation measures. It is forbidden to lay the cables in parallel above or below the heat pipes;
In the tunnel construction or in the trench of some pipelines, generally avoid laying cables. If laying is required, thermal insulation measures should be adopted; cables laid overhead, especially rubber cables as expected, should have thermal insulation measures to avoid thermal influences such as thermal pipes. ;
When laying cables, the parallel or cross distances between cables, between cables and heat pipes and other pipes, and between cables and roads, railways, and buildings meet the requirements of the specification;
In addition, there is a waveform margin for cable laying to prevent the cable from being damaged due to excessive pulling force caused by the shutdown and shrinkage of the cable in winter. Cable turns should ensure a minimum radius of curvature to prevent damage to the cable insulation due to excessive bending;
Joints should be avoided in the cable tunnel, because the cable joint is the weakest place in the cable insulation, and the cable short-circuit fault is more likely to occur at the joint. When the intermediate joint must be installed in the tunnel construction, it should be separated from other cables by fire-resistant partitions .
The above regulations on cable laying have an effective effect on preventing the cable from being overheated and the insulation damage to fire.
4. Regular security inspections
Power cables should be regularly inspected for safety, and the air temperature and cable temperature in the cable trench should be measured regularly. In particular, the temperature of large-capacity power cables and cable joint boxes should be recorded, and problems should be found and dealt with in time through routine inspections.
5. Tightly seal the cable holes and holes and set up fire doors and partition walls
In order to prevent cable fire accidents, all cable holes that pass through walls, floors, shafts, and cable trenches and enter the control room, cable interlayer, control cabinet, instrument cabinet, switch cabinet, etc. must be tightly sealed.
Fire partition walls and fire doors should be set up for long cable tunnels and their bifurcations. Under normal circumstances, the door on the cable trench or hole should be closed, so that not only the cable catches fire, but also can directly isolate or limit the scope of the fire to prevent the fire from spreading.
6. Strip off the jute outer sheath on the surface of the non-direct buried cable
There is a layer of jute protective layer such as asphalt on the surface of the direct buried cable, which has a protective effect on the cable in the direct buried ground. stripped to reduce the risk of an extended fire incident.
At the same time, the cover plate above the cable trench should be well covered, and the cover plate should be complete and strong, so that the sparks generated during the electric welding process are not easy to fall into, reducing the possibility of cable fire accidents.
7. Maintain cleanliness and proper ventilation of cable tunnels
The cable tunnels or trenches should be kept clean and tidy, and no accumulation of garbage and debris is allowed. The tunnel construction and the accumulated water and oil in the trenches should be cleaned up in time; under the premise of normal operation, the cable tunnels and trenches should be properly ventilated.
8. Maintain good lighting in cable tunnels or trenches
The lighting in the cable layer, cable tunnel or trench is always kept in good condition, and special ladders are provided for tunnel construction and trench openings that need to be up and down, which is convenient for operation inspection and cable fire fighting.
9. Avoid fire from entering the cable trench
When carrying out open flame operations around the cable, certain effective measures should be taken to prevent the fire from entering the trench.
10. Regularly carry out inspections, maintenance and tests
According to the specification requirements and the specific conditions of cable operation, the cables are regularly inspected, maintained and tested to facilitate timely handling of problems and discovery of latent faults, ensuring the safe operation of cables and avoiding the occurrence of cable fire accidents.