Structure and composition of low-voltage power cables YJV and YJV22

A cable is a conductor covered with an insulating layer, a protective layer, a shielding layer, etc. 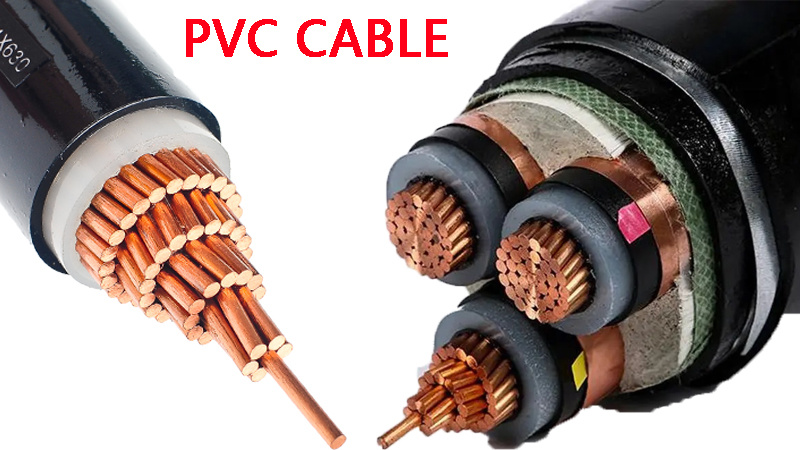 Structure of low-voltage power cables
It consists of three parts: the core, the insulating layer and the protective layer. The wire core is used to conduct current and is generally formed by twisting multiple copper wires or multiple aluminum wires. Low-voltage cables are available in single-core, double-core, three-core, and four-core types. Two-core cables are used for single-phase lines, three-core and four-core cables are respectively used for three-phase three-wire lines and three-phase four-wire lines, and single-core cables can be applied to single-phase lines or three-phase lines as required. Commonly used low-voltage cable core cross-sectional areas are 10, 16, 25, 35, 50, 70, 95, 120, 150, 185, 240 mm, etc.
1. Conductor: Taking copper low voltage as an example, it is generally heated by a copper rod and mechanically stretched into a single wire. The conductor below 6 square meters is composed of a single wire, and the conductor above 6 square meters is made of at least 7 monofilaments twisted. The pitch will affect the cost and resistance of the copper conductors of the cable. If the pitch is too large, the conductors will not fit tightly, which will cause contact resistance and heat to increase the probability of failure. If the pitch is too small, the production cost of the cable will be increased.

2. Insulation: cross-linked polyethylene is generally used to make insulation, and better cross-linked polyethylene irradiation or silane insulation is also used according to requirements. The insulation is transparent to isolate the current carried by the cable conductors in phases and prevent adjacent conductors from generating In case of electrical connection failure, the insulation cores are generally distinguished by different colors, and the insulation thickness is slightly different according to the cross-sectional area of ​​the conductor. Generally, the average insulation thickness is not less than 0.7mm thick for multi-core cables under 16 square meters, 25-400 square meters The multi-core cables generally use 0.9-2.0mm thick insulation.

3. Filling: It is made of various polyolefins and added with flame retardant plasticizer. Generally, it is made into a mesh-shaped plied filling rope, which has high mechanical strength and can ensure the appearance of the cable when it is cabled.

4. Inner lining layer: It is located between the cable core and the steel tape armored cushion or outer sheath, and is used to bind the cable core after cable formation.

5. Steel tape armored cushion: It is mainly used to protect the cable insulation core from being punctured and scratched by the bent cable steel tape, and to prevent short-circuit failure of the cable. There are two processes: 1. Wrapping saves raw materials, and the production process can be The belt wrapping is produced at one time, 2. The thickness of the extruded bag is required to be thick but has good waterproof performance.

6. Steel tape armor: used to protect cable conductors and insulated cores from damage by strong external mechanical force, prevent and reduce possible damage to cables when laying cables, multi-core cables over 50 square meters use 0.5mm double Layered steel tape wrapping, the overlap ratio is not less than 50%, and 0.2mm steel tape is used for 50 and below.

7. Sheath: The sheath of the low-voltage cable is made of polyvinyl chloride. The color of the outer sheath is black. The thickness of the sheath is affected by whether it is armored or not and the cross-sectional area of ​​the conductor, but the sheath to the thin point of all models should not be lower than 1.24 mm, used to protect the steel belt from rusting and corrosion when the cable is laid.
Laying method of low-voltage power cables
The common laying methods of low-voltage cables include direct buried laying, cable trench laying, tunnel laying and wall laying.
(1) Direct buried laying: When the number of cables laid along the same path is not more than 8, direct buried laying should be adopted as far as possible. Direct buried laying is convenient for construction, cost saving and good heat dissipation; the disadvantage is that the cable maintenance is inconvenient, cannot reliably prevent external mechanical damage, and is susceptible to corrosion. Direct buried laying is suitable for occasions where the number of cables is small and the laying path is long.
(2) Cable trench laying: The cover plate of the indoor cable trench is laid flat with the ground. The cover plate of the cable trench of the inner line of the outdoor power distribution device should be higher than the ground and double as an operation aisle. The investment in cable trench laying is less than that of cable tunnel and pipe laying. It is more convenient to repair and replace cables, occupy a small area, and route wiring is easy and flexible. When there are 18 cables, it is generally advisable to use cable trenches for laying.
cable routing
The selection of the cable routing takes into account the following conditions:
(1) Avoid the cable being subjected to mechanical external force, overheating, corrosion and other hazards;
(2) The cable laying path should be as short as possible;
(3) It is convenient for construction and maintenance;
(4) Avoid the places that need to be constructed in the planning;
(5) Try not to cross other pipelines.