The proportion of cables in power lines is gradually increasing with the market demand. Power cables are cable products used to transmit and distribute high-power electric energy in the main line of the power system, including 1-500KV and above various voltage levels and various insulated power cables.

Power cables are used for power transmission and distribution of power systems. They are often used in the bottom line power grid of tall buildings in cities and in densely populated environments. It solves the problem of restrictions on the erection and laying of overhead power lines.
一、Power cable structure 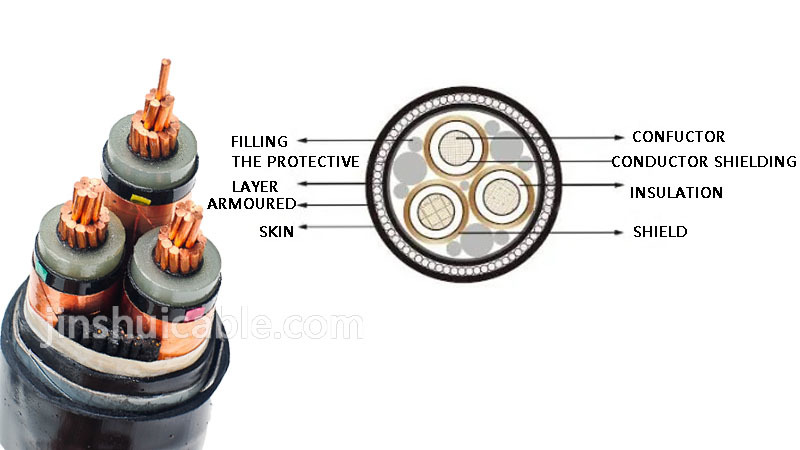 Power cables are composed of three main parts: conductive core, insulating layer and protective layer
1. Conductive core
The conductive wire core is used to transmit current, and must have good electrical conductivity, certain tensile strength, and elongation. The conductive core of the power cable is usually made of copper and aluminum stranded wires or multi-strand annealed copper wires.
2. Insulation layer
The function of the insulating layer is to electrically isolate the conductive wire core from the outside to ensure that the current is transmitted along the direction of the wire core. The quality of the insulating material directly affects the quality of the cable operation and determines the voltage level of the power cable.
3. Protective layer
The protective protective layer is to make the cable adapt to the requirements of various operating environments. The protective covering outside the insulating layer is mainly used to protect the cable from mechanical damage and various environmental factors during laying and operation. Maintain stable electrical performance.
二、The laying method of power cables
1. Direct buried laying
Direct burial laying is the most widely used method of laying. The cables are directly buried underground, which greatly reduces the cost of investment.
2. Cable trough laying
Compared with direct burial laying, the laying of cable troughs will protect the cables and is suitable for areas with complex terrain.
3. Laying of protection pipe
The laying of the protection pipe usually adopts low-friction high-strength vinylon cement pipe or glass steel pipe, etc., and the pipe wall is sealed with concrete. The main disadvantages are that it is inconvenient to inspect, it is not easy to find and detect faults, the cable heat dissipation condition is poor, and the carrying capacity is small.
4. Cable trench laying
The cable trench is excavated and built according to the design requirements, and its purpose is to lay underground special channels for cables.
5. Cable tunnel laying
Tunnel laying refers to the laying of cables in passages for installation and inspection, and in fully enclosed underground buildings.
三、Advantages and disadvantages of power cable lines in terms of power supply safety
1. Advantages of power cable lines:
(1) Power cable lines are generally laid underground, and are basically not affected by ground buildings, do not require large corridors, and occupy less land.
(2) It is basically not affected by climate and environment, and has high reliability.
(3) The maintenance workload is small, the maintenance cost is low, and the safety is good.
(4) The power cable line is conducive to lightning protection, and is also conducive to improving the power factor of the power system.
(5) It can be used in areas where overhead lines are difficult to pass, such as cross-strait power transmission.
2. Disadvantages of power cable lines:
(1) Compared with overhead lines, the project cost is high.
(2) Look for trouble at the point of failure.
(3) Line branching is difficult.
(4) The construction technology requirements of cable terminals and intermediate joints are high.