Both YJV cable and YJY cable are relatively commonly used cables. Many people do not know the difference. Let me explain in detail today. Let's distinguish it from the naming method of the cable. YJ is cross-linked polyethylene insulation, and V single-label PVC sheath at the back.

The difference between YJV and YJY cables
YJY has better water resistance and low temperature resistance than YJV, and YJV has better flame retardancy than YJY. YJY-XLPE insulated polyethylene sheathed power cable, YJV-XLPE insulated PVC sheathed power cable.
Polyvinyl chloride material, referred to as PVC in English, is a polymer of vinyl chloride. The material has good chemical stability and is resistant to corrosion by some chemicals such as acid and alkali. It has stable physical and chemical properties, insoluble in water, alcohol, gasoline, and low gas and water vapor leakage. It has the characteristics of moisture-proof, flame-retardant and anti-aging. When it is used, the temperature cannot exceed 60°C, and it will harden at low temperatures. It has flame retardancy (flame retardancy value above 40), high chemical resistance (resistance to concentrated hydrochloric acid, sulfuric acid with a concentration of 90%, nitric acid with a concentration of 60% and sodium hydroxide with a concentration of 20%), mechanical strength and electrical resistance. The advantages of good insulation. Soft polyvinyl chloride is often used as the insulation layer of cables and wires.
Polyethylene material, referred to as PE in English, is a polymer of ethylene. It has excellent cold resistance and low temperature resistance (use temperature can reach -70~-100°C), good chemical stability, and can withstand most acid and alkali erosion (not resistant to oxidizing acids), and does not mix with Blended with other common solvents, it has low water absorption and excellent electrical insulation properties. However, polyethylene is sensitive to environmental stress and has poor heat and aging resistance. It is often used as an insulating material in the electronics industry. 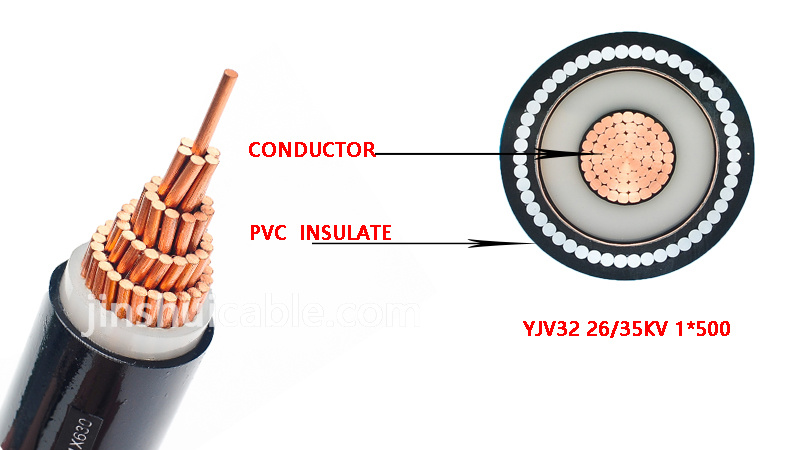 Introduction of YJV
YJV cables are also the most commonly used cables with heat resistance, electrical properties, mechanical properties, corrosion resistance and other characteristics. It has the advantages of simple structure, light weight, and the laying is not limited by the drop. It is currently widely used in urban power grids. Cables primarily used for the transmission and distribution of electrical energy. It is often used in urban underground power grids, outgoing lines of power stations, internal power supply of industrial and mining enterprises, and underwater transmission lines across rivers and seas; while YJY cables are often used in closed or crowded places, such as subway underground stations, large shopping malls, Larger underground business halls, etc. Because the sheath material of YJV contains toxic halogen, it is a halogen-containing cable. And the sheath material of YJY does not contain toxic halogen, which belongs to halogen-free cable. During the burning process, YJV will produce a large amount of harmful gas in the fire environment, and YJY cable will produce little or no harmful gas in the fire environment.

Introduction of YJY
The rated operating temperature of the YJY XLPE insulated power cable conductor is 90°C, while the operating temperature of the YJV polyethylene insulated PVC sheath must not exceed 70°C. Therefore, YJY cables have relatively high temperature resistance, and YJY has better water resistance and low temperature resistance than YJV. Moreover, the performance of YJY cable materials in terms of aging resistance, UV resistance and other radiation resistance is also greatly improved, thereby prolonging the service life of the cable. The price of cross-linked polyethylene is higher than that of polyvinyl chloride, so the cost of YJY cables is higher than that of YJV cables.