Why should control cables be shielded and grounded?

One of the important items of electrical engineering includes the connection technology of control cables. During the whole connection process, the screen closing and grounding of the city cable are essential construction links. Next we will describe in detail why the control cable screen needs to be grounded?

One of the important items of electrical engineering includes the connection technology of control cables. During the whole connection process, the screen closing and grounding of the city cable are essential construction links. Next we will describe in detail why the control cable screen needs to be grounded? 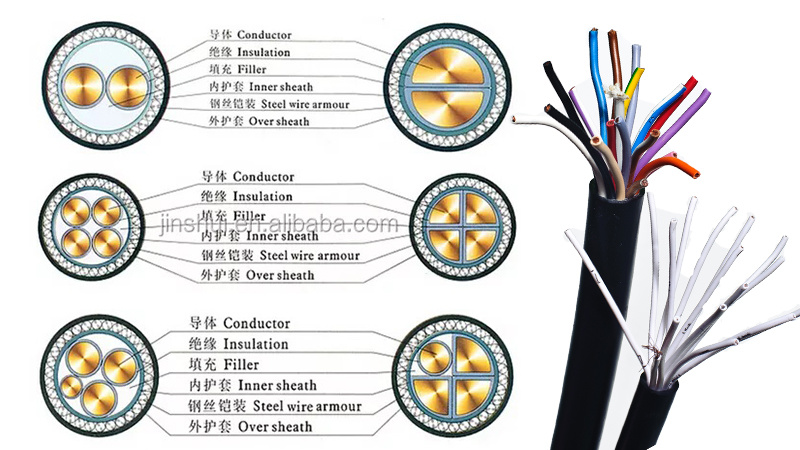 The structure and main characteristics of the control cable
Control cables are cables used to transmit control and measurement signals, etc. The main material of this cable is polyvinyl chloride, because this material has good insulation properties, this cable can work normally under the rated voltage of 450/750 volts, so it can control the operation of the circuit well. Polyvinyl chloride, cross-linked polyethylene, and silicone rubber are commonly used insulating materials for control cables. Control cables are used to directly transmit electric energy from the power distribution point of the power system to the power connection lines of various electrical equipment and appliances, commonly known as control lines. In order to prevent the influence of external magnetic field, the commonly used control cables are shielded control cables
1. Structural parameters of the control cable
(1) DC resistance: 20℃, 0.4mm copper wire, less than or equal to 148Ω/km, 0.5mm copper wire, less than or equal to 95Ω/km.
(2) Insulation electric strength: 1min1kv between conductors without breakdown Conductor and shielding 1min3kv without breakdown
(3) Insulation resistance: each core wire is grounded with the rest of the core wires, the control cable is greater than 10000MΩ.km, and the HYAT cable is greater than 3000MΩ.km.
(4) Working capacitance: average value 52±2nF/km
(5) Far-end crosstalk defense: at 150kHZ, the average power of the specified combination is greater than 69dB/km.
(6) Rated voltage: U0/U is 450/750V.
(7) The long-term working temperature of the conductor core is 70°C and 95°C, and the cable laying temperature is not lower than 0°C.
2. Requirements for the bending radius allowed by the control cable
(1) Unarmored cables should not be less than 6 times the outer diameter of the cables;
(2) Armored or copper tape shielded cables should not be less than 12 times the outer diameter of the cable;
(3) Shielded soft control cable, not less than 6 times the outer diameter of the cable.
Control Cable Performance
1. The control cables are moisture-proof, anti-corrosion and damage-proof, and can be laid in tunnels or cable trenches.
2. The voltage and current of the control cable are very small, and the anti-interference requirements are high. The rated voltage is generally 450/750V, and the number of cores is relatively large. According to the standard, there are as many as 61 cores, but it can also be produced according to user requirements. Generally, the cross-sectional specifications of the cables are usually relatively small, and shielded twisted pair control cables can be used for places with relatively high requirements.
3. The long-term allowable operating temperature of the control cable is not higher than 70°C, the longest duration of the short circuit does not exceed 5s, the maximum temperature of the cable conductor does not exceed 160°C, and the ambient temperature when the cable is laid should not be lower than 0°C, otherwise it needs to be checked in advance. warm up.
How to avoid electromagnetic interference on cables?
In order to prevent electromagnetic interference from causing misoperation and damage to electrical equipment, the cable shield is closed and grounded, which can also avoid electromagnetic interference.
There are two situations at both ends of the cable shielding closed layer: 1. When a short-circuit current or lightning current occurs on the grounding network, due to the different potentials of the cable shielding closed layer, the current passes through the screen closed layer, which will generate additional impact or interference voltage.
2. When the current passes through the screen closure layer, each core wire will generate an interference signal. However, for shielded cables for relay protection and automatic circuits, electromagnetic interference is the main factor, because the input and output terminals are located in the high-voltage or extra-high-voltage environment of the power grid. To protect against transient overvoltages, the cable shield closures for electrical relay protection and automatic devices should be grounded at both ends.
What is the specific construction method of shielded cable?
Should the closed layer and outlet of the cable shield be welded, crimped or wound? Each construction unit has a different method. The secondary wiring of some construction units has been using the lap joint method, that is, the core of the grounding yellow-green wire is tightly wound on the shielding layer, and wrapped tightly with PVC insulating tape, and then heated to shrink. The disadvantage of this construction process is that the contact between the yellow-green wire core and the shielding layer is the copper contact surface, and a layer of copper oxide will be formed on the surface after a long time. Electrons and ions of copper oxide cannot move freely and are an insulator structure, which directly increases contact resistance and makes shielding off and grounding ineffective. Therefore, in the current construction process, the method of adding welding is adopted, that is, tinning is carried out on the basis of the original winding wire. Although a process is added, the reliability of the contact is improved and possible quality defects are eliminated. If it is a double-layer control cable, the outer layer should be grounded through the yellow-green wire, and the inner layer should be grounded at the equipotential. At this time, the outer layer of the current is induced due to the potential difference, and a magnetic flux is generated to reduce the strength of the source magnetic field, so that the induced voltage can be canceled out without the outer layer. Of course, if you want to prevent electrostatic interference, no matter whether it is a layer or double shielding, it must be grounded at a single point.