The number of cores and production usage scenarios of overhead cables are different, and the specification parameters are also different. We need to choose cable models with different cores according to different specifications. 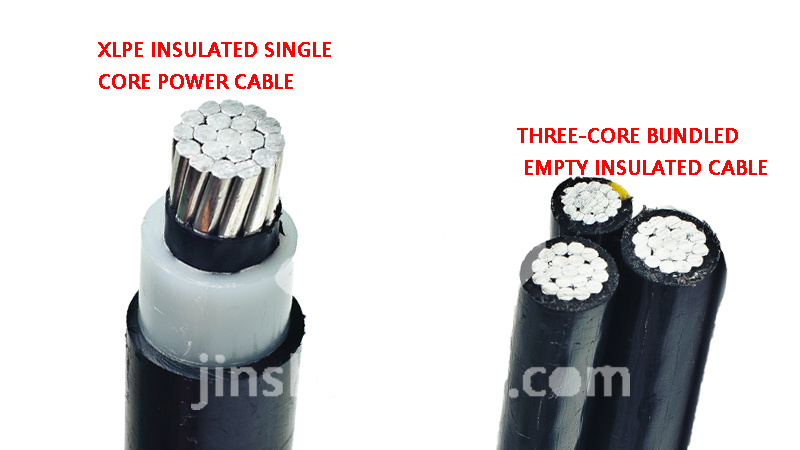 Main features of overhead cables
The main features of overhead insulated conductors (ABC cables) are good insulation performance. Due to the extra layer of insulation layer, the insulation performance of overhead insulated conductors is superior to that of bare conductors, which can reduce the distance between lines, reduce the insulation requirements for line supports, and increase the number of circuits of lines erected on the same pole. Due to the insulating layer on the outer layer, the overhead insulated wire is less oxidized and corroded than the bare wire, and has stronger corrosion resistance, which can prolong the service life of the line. And it can also prevent external damage, reduce the influence of external factors such as trees, flying objects, metal films and dust, and reduce phase-to-phase short circuit and grounding accidents. However, the number of cores and the production and use scenarios are different, and there are also different specifications and parameters. We need to choose cable types with different numbers of cores according to different specifications.
1. Scope of application and installation environment
Single-core cables are suitable for indoors, tunnels, and cable trenches, and cannot withstand external mechanical forces; without armor (eddy current effect). It is not suitable for direct burial laying (considering heat dissipation); cables are not allowed to be laid in magnetic pipes such as steel pipes.
The three-core cable is suitable for: indoors, tunnels, and cable trenches, and can withstand certain mechanical external forces and tensions; it can be laid directly with armor; it can also be laid in various pipes including magnetic pipes.
2. Manufacture and transportation
Single-core cable: Because the outer diameter of the single-core cable is small and the weight is light, the length of the cable can not be limited by the cable reel and weight, and the length of the 400mm2 single-core cable can reach 1000m
Three-core cable: during the cable manufacturing and transportation process, due to the weight limit of the cable reel and the cable itself, each reel of cable cannot be made too long, and the length of a 400mm2 cable generally does not exceed 500m
3. Construction and installation
Single-core cable: (1) The single-core cable is easy to lay, but the laying length is three times that of the three-core cable, and the overall construction time is longer; (2) When the single-core cable climbs the multi-circuit cable terminal tower, due to too many roots, The layout and construction are cumbersome; (3) When the cables are connected to the terminals in the cabinet and the panel, the electrical safety distance can be reduced due to the reduction of crossover, which makes the installation work easier; (4) In the long line project, the cable joint can be reduced and the operation reliability can be enhanced. ; (5) The allowable bending radius is small, which is conducive to the laying of large cross-section cables.
Three-core cable: (1) The three-core cable is not easy to lay, but the laying length is 1/3 of the single-core cable, and the overall construction time is shorter; (2) When the three-core cable climbs the multi-circuit cable terminal tower, it is convenient to arrange the cable; (3) When the three-core cable is connected to the indoor power distribution device, the terminal head of the three-core cable is greatly affected by the size of the cable compartment of the power distribution device and the torsion of the laying position of the cable itself.
4. Operation
Single-core cable: (1) Since the single-core cable is not allowed to be armored with magnetic steel tape, the requirements for the laying environment are more stringent. Generally, external force damage may cause damage to the cable; (2) The single-core cable is It is three independent cables with a long distance between phases. Once the cable is grounded, it is difficult to develop a short circuit between phases; (3) If the outer sheath is partially damaged during long-term operation, resulting in multiple groundings on the metal shielding layer, the cable cannot maintain Safe operation; because the metal shielding layer of a single-core cable normally needs to be grounded on one side or cross-connected; if it is directly grounded, the metal shielding layer will generate a large circulating current, which will burn the cable.
Three-core cable: (1) Since the three-core cable is protected by steel tape armor, the requirements for the laying environment are relatively loose, and it has a certain protective effect on general external damage. (2) The three-core cable is covered by three phases, and the phases rely The insulating material is used for insulation. If the insulating material is damp and deteriorated, it is easy to cause phase-to-phase short circuit (3) In the long-term operation, if the outer sheath is partially damaged, resulting in multiple grounding of the metal shielding layer, the cable can still maintain safe operation, because The metal shielding layer of the three-core cable needs to be grounded under normal conditions
5. Price

For high-voltage cables with the same cross-sectional area, the price of single-core cables is cheaper than that of three-core cables. Aerial cables are the most common type of cables in daily life. The price will vary depending on the amount of materials used, but the quality is guaranteed to a certain extent. Therefore, it is better to choose according to the design drawings when purchasing.